The voices of military veterans were fresh in the ears of Artistic Director Jacques Heim and his team of Diavolo dancers and directors when they arrived at Chapman University in July. They were here to create a new Veterans Project to anchor the three-piece dance program that opens Musco Center's 2019-20 Season on September 21. 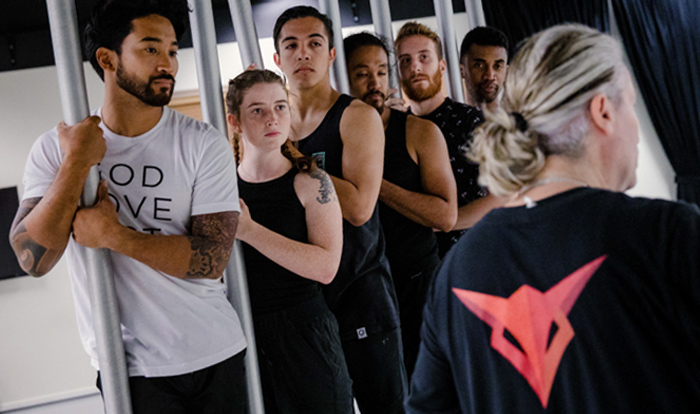 "We had just done an intense three-week workshop with veterans in Tampa, Florida," Heim said in a July 14 phone interview. "One woman had done seven tours. She has so much to deal with. At the end of the workshop she came up to me, looked me in the eyes, and said, 'Thank you for doing this. I needed this. I needed this." In the three years since Heim began tailoring his rigorous Diavolo movement workshops for former U.S. service personnel, such encounters have become uncomfortably familiar. Each confirms for the French-born American citizen that his L.A.-based dance company is doing something vitally important.

"After another workshop," Heim continued, "one veteran said that a few weeks earlier he had been ready to take his own life. 'Now,' he told me, 'I feel I need to live. I need to fight for my life.'"

That unique potential for the arts to change lives is, in part, what inspired "Leap of Art," a new Musco Center pilot program that is also launched by Diavolo's season-opening performance.

"Some years ago I realized that it's not enough to create art simply to entertain and excite audiences," Heim said. "Working with the veteran community I clearly saw that the reason I have a dance company goes beyond art. Talk about Leap of Art! I believe that the way these Veterans Project workshops and performances help these men and women takes art to a whole different level." 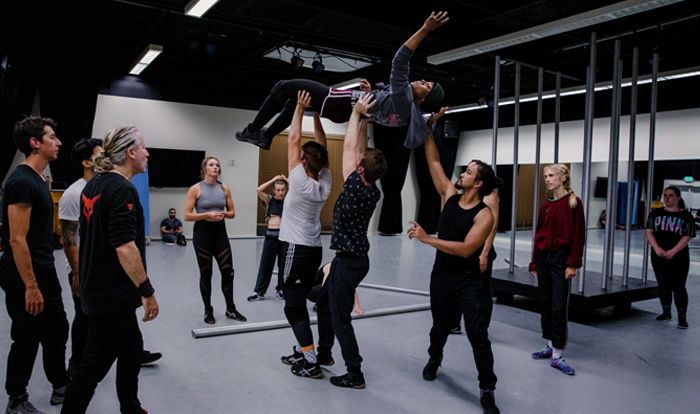 A New Piece for the New Season

Since Heim founded Diavolo in 1992, his physically demanding workshops have helped his company members and others "discover who they are, so they can excel in their lives." After he began working with veterans, the powerful stories and raw emotions they shared affected him profoundly, and he was convinced a larger audience needed to understand their experiences on duty and back home.

Carefully and with great respect, Diavolo's directors and dancers crafted their first Veterans Project. Three years and half-a-dozen projects later, Musco Center has commissioned a unique Veterans Project dance piece for Orange County. It is drawn from the experiences of eight area veterans who are in the dance company that debuts the piece on September 21.

"The casting process is deeply important," said Matt McCray, the freelance director who has served as Musco Center's project liaison. "You're essentially casting the stories that will be foundational to the piece. At the initial meet and greet, the veterans and the artists each told why he or she wanted to do this. The main focus for Jacques that first day was finding the common experience and subject matter."

One participating veteran is Justin Stirewalt, 28, who was active duty Air Force. He described the process as creating "a live adaptation of the stories of the people involved: veterans from the Vietnam era, the Korean War, Desert Storm and the War on Terror and couple who are still serving." To get the process started, Heim shared excerpts from letters written by soldiers during World War II. This helps each new Veterans Project begin with a structural road map, but it soon becomes unique to that community's participating veterans. 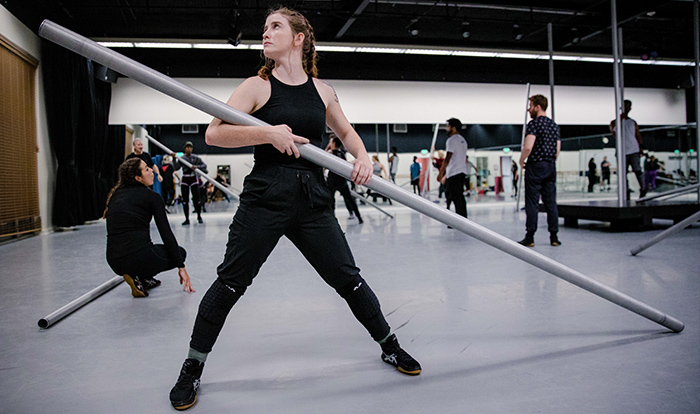 "Our project has different elements that all feel relevant to military life, like helping your partner next to you, or watching someone fall in combat," said 29-year-old Micah Coate, an Air Force Reservist raised in Sonoma County.

"The narrative evolved from individual experiences with platoons or squad mates in whatever branch we served," added Stirewalt, who is in the second year of a screen-acting program through Chapman's Film School and Theater Department.

The minimal physical production is key to the performance piece. A simple 18-inch high, six-foot square platform is in the center of the stage. There are 16 evenly spaced holes across the top into which the dancers may insert heavy 10-foot metal poles. They serve as both design element and metaphor.

"We lift these giant 10-foot poles," Coate said. "And lifting them we find we have more strength than we thought. It's a little abstract. What makes it recognizable is that we are each using our entire being, and our full emotions. Those emotions come through and connect with people in the audience."

"It's surprising what they've asked us to do and what we've been able to do," said Stirewalt. "We had seven rehearsals in the first eight days. There was a lot of exploration and trying to get a feel for what our individual physical limitations were. But it has been surprising that I've been able to do a lot more than I'd initially thought would be possible."

"He is a crazy artistic genius," Coates said of Heim. "He's very tough on us but in a good way. He expects that if you say, 'Yeah, I can do this,' then you better do it. He holds us to a really high standard. It's pushing me in different ways. I am very happy that I did it." 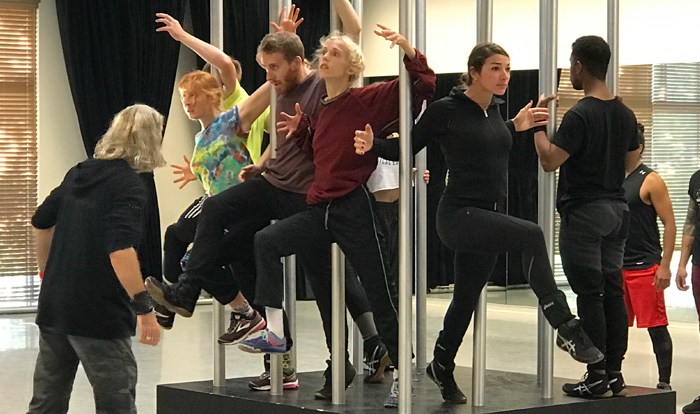 Said McCray, "In most theater pieces, plays, and music events you don't feel that the thing is simultaneously a piece of art and also a public service. This feels very much both. But one doesn't minimize the other. The public service component doesn't mean that it's any less artistic, but just increases its value in the world exponentially. Everybody wins in that."

Leap of Art's leap of faith

"I'm using art as something even more grand because there are so many people who actually can benefit from it as a source therapy in a way," said Heim. "That's why working with veterans has changed my life, and the lives of my company members, and ultimately the life of my company." "Leap of Art will tap the passions of Chapman University and allow it to express itself in works of art," said Musco Center Executive Director Richard T. Bryant. "Works of art can say things that can't be said in words." 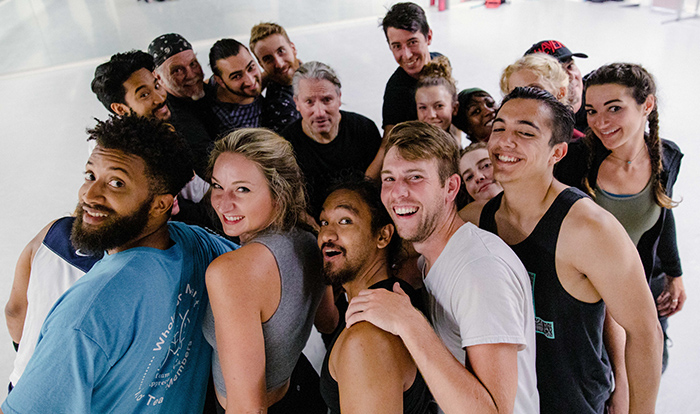 Leap of Art also serves as the prototype for Musco Center's art-and-academics collaborations. These demonstrate how live performance can illuminate topics of special interest to a university environment and scholarship across its various colleges and departments.

Musco Center, Bryant pointed out, will always partner with one or more of Chapman University's departments. Here, the Chapman University Department of Dance is the prime collaborator for faculty and student outreach.

"As the inauguration of the Musco Leap of Art program, the Diavolo Project is a model," Bryant added. "This is a shift of the role of a performing arts center embedded into a university, except for a very few that already practice this point of view. Each of the first three Musco Leap of Art installments will capture a passion that the university has for this community."

Following the Diavolo Project, the final two Leap of Art residencies will be by magician-educator-therapist Kevin Spencer in February and composer-musician-filmmaker Kishi Bashi next spring. 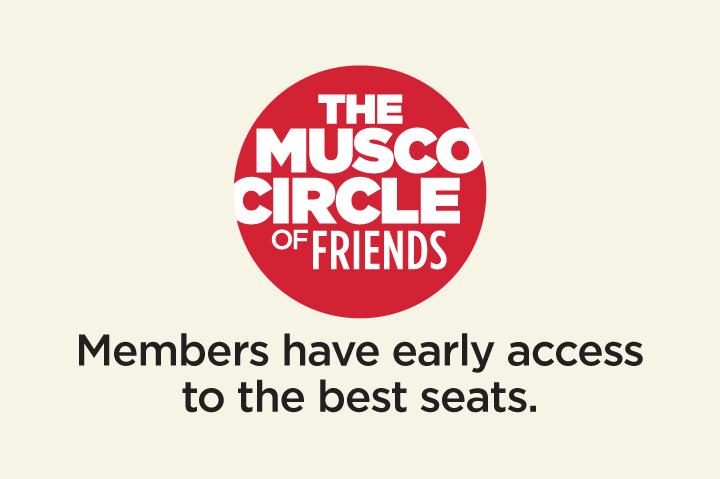